Casillas and Villa, among the World Champions to join the lineup

Casillas and Villa, among the World Champions to join the lineup

For a long time, the senior national male team was the weak link of Spain’s impressive football chain. Spain had won almost every existing U- 17, U-19 and U-21 nation competition as well as the Olympic Gold Medal, and LaLiga clubs were consistently among the most successful teams in UEFA competitions. However, when it came to Eurocups and World Cups, Spain’s journey always ended abruptly in painful quarter final defeats.

Over the years, some of the country’s most talented players succumbed to what seemed to be an unbreakable curse. Until a unique generation of footballers, most of which were no more than 1,70 m tall, came together around the much celebrated ‘tiki-taka’, a style that teams across the world still strive to replicate due to its unmatchable mix of beauty and efficiency.

This year marks the tenth anniversary of the most remarkable success of that unique generation of players: the 2010 FIFA World Cup. The victory against the Netherlands in Johannesburg meant tearing down the final wall for Spanish football. It brought the whole country together in the midst of a global economic crisis that was devastating for its citizens, and its importance went far beyond the playing field. The World Cup ignited the professionalization and modernization of all the structures of the sport in the country, consolidating Spanish football as a powerful industry and one of the pillars of Spain’s country brand. 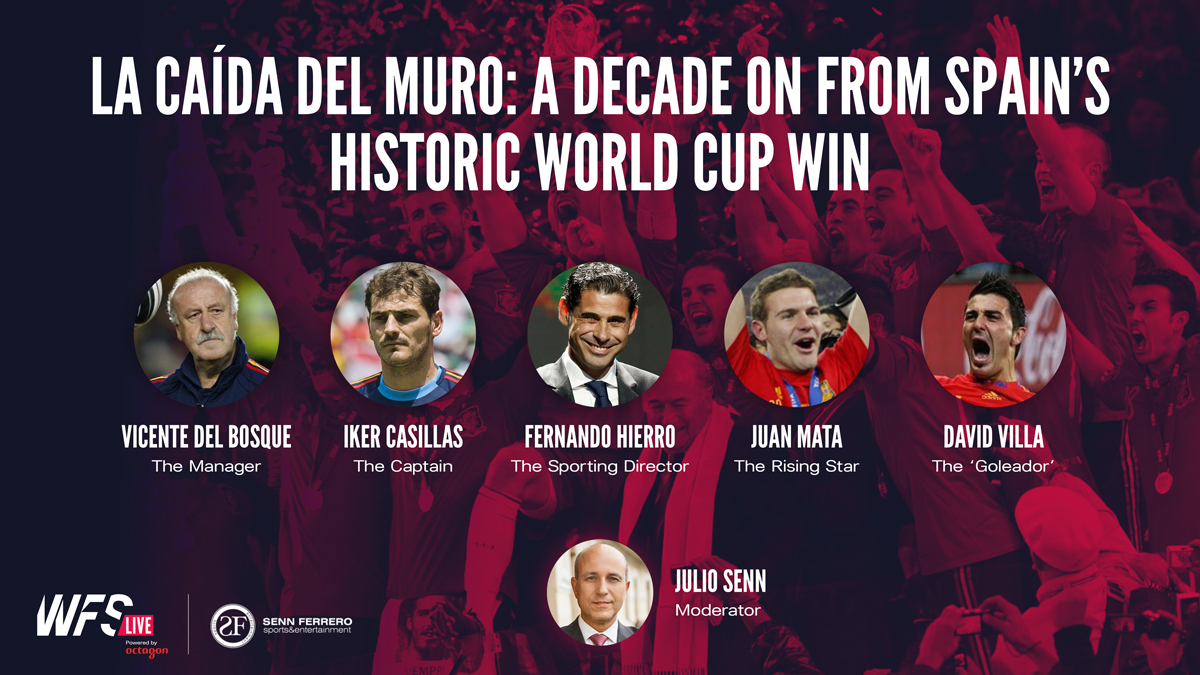 To celebrate this tenth anniversary, WFS Live powered by Octagon and Senn, Ferrero Sports&Entertainment are bringing together some of the key actors of that historical victory: Fernando Hierro, former Sporting Director of the Spanish Football Federation; Vicente del Bosque, Manager of the team from 2008 to 2016; Iker Casillas, the captain, David Villa, top scorer, and Juan Mata, who was one of the team’s rising stars in South Africa, will be sharing their memories with moderator Julio Senn in a session that will surely touch the heart of all the fans of that remarkable team.

‘La caída del muro: A decade from Spain’s historic World Cup win’ will take place on Friday July 10th a day that has been added to the WFS Live powered by Octagon schedule, which will run from July 6th to 10th. This extra day will be focused on discussing on the pitch issues and will feature some of the game’s biggest legends.

Héctor Prieto (YBVR): “80% of the WFS StartCup jury were potential clients of ours”