World Football Summit is proud to announce that FIFA Secretary General Fatma Samoura has joined the line-up of speakers for the upcoming WFS Live digital event that will see football’s global stakeholders come together around the main issues affecting the industry from November 23-27. Samoura will be the guest speaker at the event’s closing session on Friday November 27 at 5.20pm (CET).

Samoura – recently inducted into the International Women’s Forum Hall of Fame alongside trailblazing women such as Maya Angelou, Rosa Parks, Ruth Bader Ginsburg and Hillary Rodham Clinton – was appointed as FIFA’s first female and first African Secretary General in its 116-year history in 2016.

Samoura’s experience in complex development, socio-economics and security, as well as her humanitarian values, have made her a strategic figure in the exemplary set of reforms lead by FIFA President Gianni Infantino, playing a key role in promoting best governance practices, tackling any kind of discrimination and, ultimately, making football truly global.

Samoura will speak with sports broadcaster Carol Tshabalala about her path to FIFA, her work alongside its president Infantino to use football as a tool to bring about positive development, her commitment to championing diversity and much more.

This will be Samoura’s second time participating in a WFS event following the keynote address she delivered at WFS17 in Madrid, where she spoke about what she listed as FIFA’s top priorities: “Promoting development, gender equality and most importantly good governance”.

“We are delighted to have Fatma Samoura speaking at WFS Live. At World Football Summit we believe that for football to continue being the world’s most popular game all stakeholders must acknowledge the need to embed social purpose at the heart of the industry,” said World Football Summit director, Jan Alessie. “No one can provide a more valuable testimony than someone that has a proven record of promoting social development across the globe.” 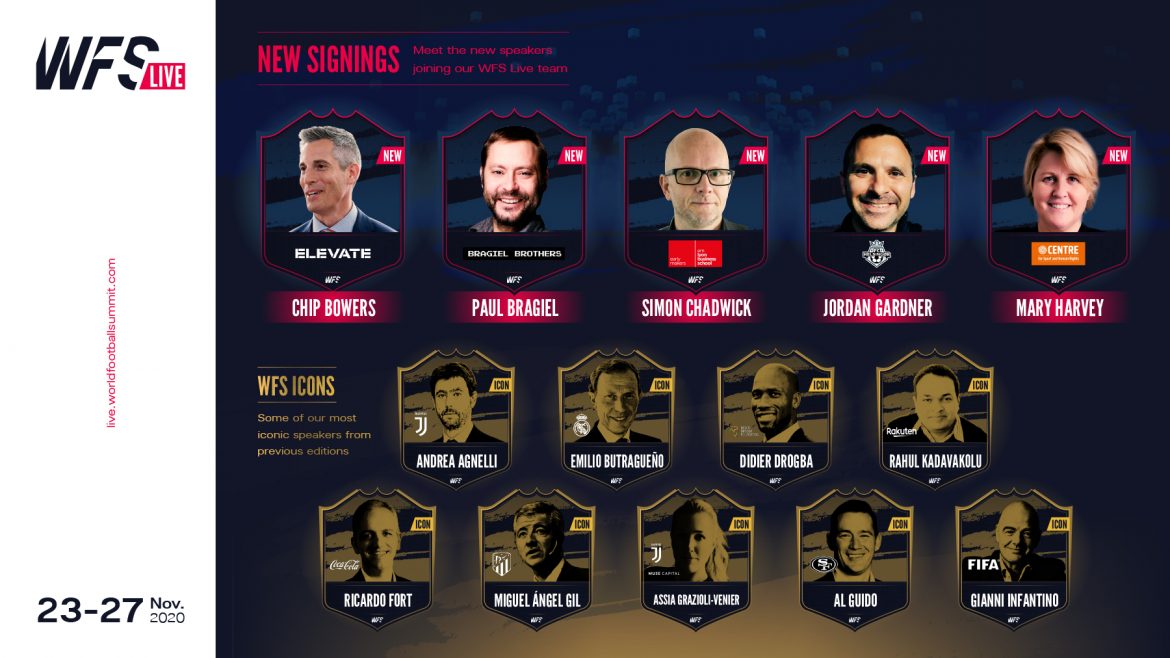 The transfer window may have closed across Europe this week, but that hasn’t stopped World Football Summit from dipping into the market to make five big name signings for the return of WFS Live from November 23-27.

The quintet will lead a series of announcements over the coming weeks, which will unveil both our full lineup of speakers and event programme.

They each bring with them a wealth of experience from across the football industry that we are excited to see shared with the WFS community across the WFS Live platform next month.

🤝 Welcome to the #WFSLive team…

In our speaker releases, we will also celebrate some of our most iconic past speakers, with this first round reveal also paying homage to the likes of FIFA president Gianni Infantino, Ivory Coast legend Didier Drogba and Juventus board member Assia Grazioli-Venier.